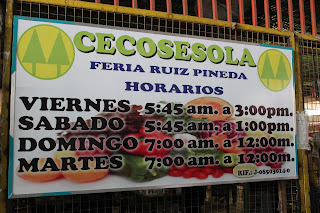 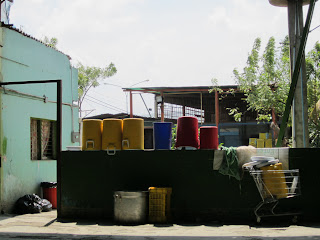 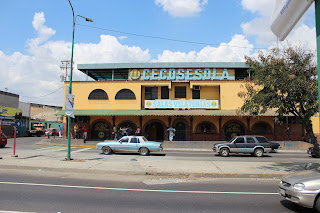 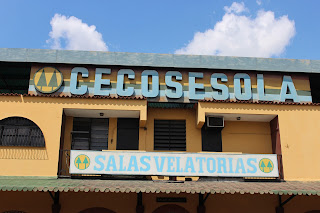 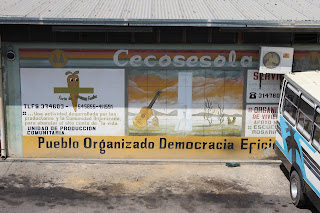 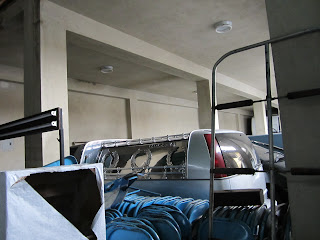 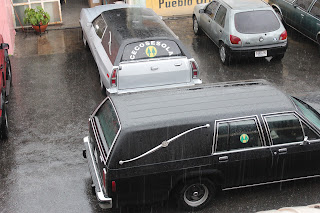 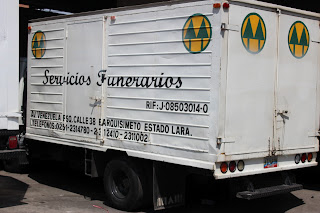 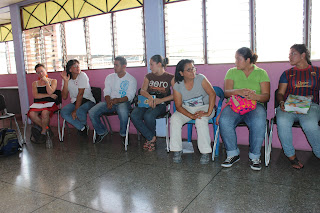 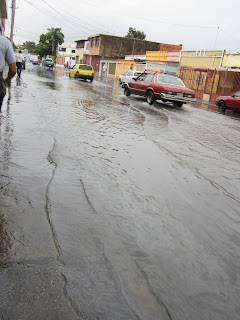 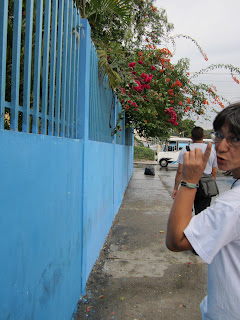 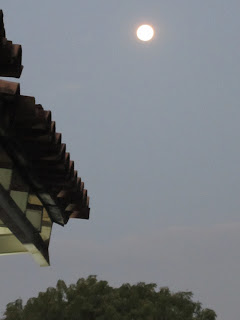 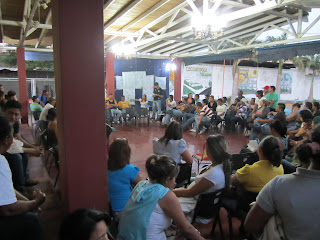 This morning, Ale and I arrive at the Feria Ruiz Pineda, me in a car with Ricardo, and Ale by way of several rapiditos, shared taxis that augment the bus service here in Barquisimeto. We have a meeting in the office of contabilidad (accounting), a crisply air conditioned room ringed with twenty or more computers, and a compañer@ at every one. On the wall, several large pieces of butcher paper have been taped together, and Cecosesola's overall finances have been represented in three columns of numbers, with differently colored markers for 2010, 2011, and the projected budget for 2012. We sit down and folks at the computers stop their work to meet with us. A compañera reviews the numbers on the wall: some of which track sales, others the costs of goods and taxes, and others various funds ( health, education, loans for other cooperatives, etc).

We talk about the structure of accounting in a collective organization as large as Cecosesola. Even though there is a central office for contabilidad , financial computation and accountability happens throughout the organization at both micro and macro levels. As I've mentioned before, inventory happens every week at Cecosesola. This Monday, when Ricardo and I arrived at la Feria del Centro, there were some areas of the deposito (warehouse) left to be counted, which means I got to participate. I was handed a legal-sized excel document already printed with the types and brands of products kept in a particular row in the warehouse, along with columns for quantity, unit, etc. Another compañero was handed the same sheet. Starting on different ends, we counted pallets of tuna, coffee, and canned peas. At the end, we compared numbers, re-counted when they didn't agree, and signed each others' documents.

At the same time, other teams of people on the feria floor were counting bags of ripped, broken, and otherwise damaged items: the loss. Each week, once inventory is done, a rotating group of people from every work area takes the information from the previous week's inventory and compares it to the current week, as well as to the registered loss. They create a report called a control, which is then presented in the meeting of the corresponding feria. They check to make sure that sales and loss correspond with the lists made during inventory. If they don't, the team seeks an explanation. If none is found, or if the explanation is theft or another situation by which Cecosesola has lost money or product, the entire team takes responsibility by splitting the loss and paying the collective back.

This is one level of accounting. Since each team member has the chance to prepare these weekly reports, everyone is able to gain competence with the organization's finances. At the meetings where these numbers are presented, therefore, there is a high level of understanding among attendees, and lots of group participation while the group works towards solution-making. This week, for example, the equipo de verduras at the Feria del Centro experienced loss at a percentage higher than the upper limit they'd set for themselves. The explanation: the vegetable section had been short-staffed all weekend and many stations weren't attended, like the yuca, which can be easily broken, or the cilantro, which should ideally be given out by hand.

At the next level of accounting, each worksite—the 3 ferias, the funeraria, and the Centro del Salud—tally their own weekly reports and keep track of their yearly budgets. This information, then, is funneled to the central office of contabilidad , where it is compiled into an overall budget. This team also undergoes regular rotation of members to further distribute financial skill around the organization.

Before long, as so many conversations do here at Cecosesola, the conversation turns to confianza. We talk about the many reuniones, and the amount of time people spend in them. (For example, the reunion of the Feria del Centro we attended on Monday went from 12:30-7 at night, and the reunion de gestion this week featured a full screening of Shawshank Redemption, followed by a small and large group reflection on themes of passion, trust, and fear. The compañer@s in contabilidad make the case that the amount of time spent building confianza in reunions can actually be cost effective, in that important decisions don't have to be delayed by rifts among workers. They also explain that everyone having the chance to take responsibility for the organization's finances through inventory, weekly controls, and reflections in meetings helps build confianza because people are able to be more supportive when they have fuller understanding of kind of job their co-workers are trying to do.

In total, the compañer@s in contabilidad spend more than an hour and a half with us. The talk about the expansion at la Feria Ruiz Pineda, and how Cecosesola has been paying for it: through colaboraciones from the community, through budgetary projections, and by funneling extra money left over after the weekly controls have been done. We are somewhat relieved to hear that the project, which is now some months from completion, has been 10 years in the discussion and planning stages. We are of course reminded of our own long path in terms of current expansion.

All of what we hear meshes well for me with what my understanding of OFC's staff structure evolution in process. I leave the meeting with my head buzzing with ideas to be explored further when we return.

In the rest of the day, we attend a meeting of new collective members at the funeraria, and listen to the new folks present research they've done on Cecosesola's crazy history as a transportation cooperative, complete with tales of protest marches to Caracas, government infiltration, sabotage, and more.

We tour the funeraria briefly, and learn about the mortuary, funeral, and burial services that Cecosesola offers to its workers, as well as to the community at an accessible price.

It rains like crazy and the streets are flooded as we walk back to the escuela, where we will stay tonight, and where I mean to actually go to sleep, very soon.

Check out some previous posts for new photos, and here's a few to go with today.